Standards in mobile telecoms are a mixed bag and no discussion of them is far from controversy. For every success story that we remember (such as GSM) there is failure that we have forgotten. Getting a bandwagon going creates scale economies provided that the right standard got picked. However, moving forward standards can form a collectively set constraint on competitors. Could there be subtle restrictions of competition lurking behind some of the common de facto standards?

The findings of the study by DotEcon, Analysys Mason and Hogan & Hartson for the European Commission on exploiting Europe’s Digital Dividend1 – the freeing-up of airwaves historically used by analogue TV – have been widely publicised. The Commission has already moved to implement our two main recommendations: that Member States clear and award the 790–862MHz sub-band in a format suitable for mobile broadband; and that there should be a future review to consider further clearance of the UHF band below 790MHz.

However, in the same report, we also urged the Commission to explore ways to encourage manufacturers to develop more frequency-agile technologies –those that are capable of slotting together in the radio spectrum without requiring rigid band plans that are hard to adjust down the line. We singled out the frequency division duplex (FDD) systems currently used to deliver mobile broadband over cellular networks as a barrier – at least in their present form – to long-term efficient spectrum use by making it difficult to use additional spectrum added later to existing spectrum bands.

On first sight, it might seem harsh to criticise the efficiency of FDD technology. Over the last twenty years, cellular mobile provided on the basis of FDD technologies, has emerged as the most commercially valuable use of radio spectrum.

Yet activity today is concentrated in only 320MHz of spectrum across Europe, only 70MHz of which is in the most attractive bands below 1GHz. This will expand to over 500MHz, with 130MHz below 1GHz, when the new 800MHz and 2.6GHz bands become available. By contrast, digital terrestrial television (DTT) will still have priority over 300MHz of spectrum below 1GHz, even after the loss of the 800MHz band.

Compared to other leading candidate uses of UHF spectrum, the interference impact of FDD technology is modest. Long-term Evolution (LTE), the FDD-based next generation standard for wireless networks that operators plan to deploy at 800MHz, will operate at low or medium power levels. By comparison with high-power DTT, this limits scope for geographic interference, thus making coordination of frequency use across national and regional boundaries easier.

It is also possible to pack mobile network operators into adjacent spectrum without frequency separation (although a gap between uplink and downlink is required). This compares favourably with existing TDD technologies, such as WiMax, which require at least 5MHz separation between operators, even if they are deploying the same technology as their neighbours.

How digestible is new spectrum?

Notwithstanding all these benefits, the trouble with FDD is the inflexibility it creates in making use of spectrum as it becomes available. FDD expects spectrum to be delivered in monolithic blocks all at one time. This is because LTE, like its GSM and 3G predecessors, will be deployed using a so-called ‘fixed duplex split’. In non-technical terms, that means two blocks of spectrum, one for uplink (speaking or sending data) and one for downlink (listening or receiving data), separated by a fixed frequency gap, are required in order to provide service.

It is the fixed bit that causes the problems: each block of uplink spectrum has to be the same distance away from its downlink pair. This has the effect of capping the maximum size of a cellular mobile band at the point of its inception. As a result each time mobile demand grows to the point that new capacity is used, regulators have to find a new band; the simpler alternative of expanding an existing band is impossible.

Consider the example of the 800MHz band, now planned across Europe. The proposed band plan is illustrated below, where the lot names D1, U1 etc. indicate paired downlink and uplink blocks respectively, each exactly 41MHz apart. The centre gap of 11MHz in this case is an irreducible minimum to prevent interference between uplink and downlink. Observe that it is impossible to add further blocks without abandoning the fixed duplex structure; for example an extra block below D1 could not be matched with an uplink lot below U1, as this would eat into the centre gap and be too close to the downlink frequencies. 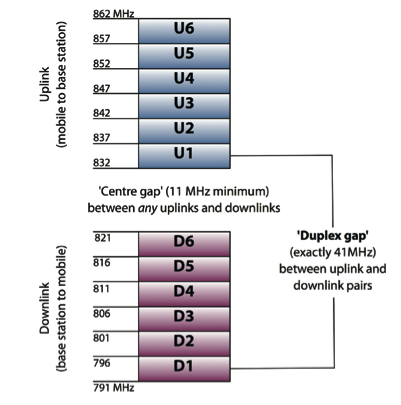 This rigid structure explains why there has been a proliferation of bands for cellular mobile, and why mobile operators and regulators are already talking about creating a second sub- band suitable for mobile broadband at 700MHz.

The inflexibility of FDD technology also creates a massive coordination challenge for regulators. The economics of the mobile industry dictate that all European countries adopt exactly the same band plans, as the technology is not flexible enough to work with different duplex splits. If one country deviates from the common approach, manufacturers would have to build different network components and handsets for that location, which in turn will mean higher costs and less handset choice for consumers, and may even jeopardise foreign roaming.

This ‘one size fits all’ approach to allocating spectrum to mobile broadband in different countries contradicts the spirit of Commission and member state initiatives to liberalise spectrum use. European policy is to release spectrum on a service- and technology-neutral basis, and allow the market to determine the optimal use, which could differ from one country to the next. However, the fixed duplex band plan required for LTE leaves little scope for other uses to share spectrum.

For example, suppose in the 800MHz band, there is a technology-neutral auction using the FDD band plan, and there is a non-LTE user interested in lots D1 to D3. Allocating these blocks to this user would also have the effect of preventing lots U1 to U3 being used for LTE, but these other lots are inconveniently placed at the centre of the FDD band, so may not be usable for anything else. If lots are sold on a paired basis, the odds are stacked against alternative uses coming out on top in an auction, because of the way the lots are pre-packaged.

Absent the requirements to coordinate band plans imposed by the limitations of FDD technology, allocating the same amount of spectrum to cellular broadband in all European countries would only make sense if the opportunity cost of the spectrum – its value compared to another use like DTT – is the same everywhere. This is obviously untrue. Demand for spectrum will inevitably be affected by differences in take-up rates for mobile broadband (high in urban hot spots, much lower in rural areas) and the number of network operators vying to outbid each other. These factors vary widely between countries and regions. And the opportunity cost of taking spectrum away from DTT is much lower in countries like the Netherlands where cable is the main means of viewing television than in ones like Spain that rely on broadcasting over the airwaves.

The case for more flexibility

Looking forward, significant socioeconomic benefits might be unlocked if more flexible technology solutions could be found for delivering mobile broadband. FDD itself could potentially be made more agile. For example, suppose that manufacturers were to develop a frequency-agile FDD system capable of working with variable duplex spacing over a large swath of spectrum. (This could still be subject to a minimum size of duplex gap to facilitate the radio engineering.) By permitting a variable rather than a fixed distance between paired uplink and downlink blocks, different countries could utilise different amounts of spectrum and potentially different frequencies for mobile broadband according to their own needs.

Moreover, this would potentially eliminate the need for regulators to specify and coordinate whole new spectrum bands for mobile broadband. Instead, market mechanisms, such as auctions and trading, could allow domestic band plans to emerge in which different uses shared the spectrum. It would also be much easier to expand or contract the supply
of spectrum for any particular use over time in response to changing market conditions.
Frequency-agile FDD systems are only one possible technology solution for more efficient delivery of mobile broadband. Others might involve TDD systems (that use the same channels for uplink and downlink instead of paired spectrum) and/or ‘cognitive’ devices that search across bands and transmit in un-utilised spectrum. However, such systems will only be viable if they can be integrated cost-effectively into cellular mobile networks and handsets.

The current approach of periodically identifying new bands of fixed size for mobile broadband may suit existing operators. The requirement for rigid FDD band plans creates barriers to other uses or technologies moving into spectrum that is planned for mobile operators, and also provides certainty over the competitive environment between new awards, as entry and expansion opportunities are constrained.

Ironically, in order to realise benefits from liberalisation of spectrum, intervention by regulators may yet be required to promote technologies that facilitate more flexible use of spectrum. This is why our study team recommended that the Commission and member states undertake more research into frequency-agile systems.