Singapore is by all accounts a success story for the deployment of fibre networks.  In 2008, the Singapore government contracted OpenNet to roll out a national fibre network and provided a government grant of up to S$750m on which OpenNet could draw.  By mid 2012, 95% of premises in Singapore had been connected.  Open access and regulated wholesale prices for fibre access have since resulted in new entry, and providers such as MyRepublic, SuperInternet and ViewQuest have brought notable vibrancy to competition in the market.

However, whilst residential customers have been attracted by the offer of greater bandwidth and better resilience. take-up by businesses has been sluggish.  By the end of 2013, fibre accounted for  just 20% of Small Medium Enterprise (SME) broadband subscriptions compared with approximately 38% of residential broadband connections.

This is despite the fact that fibre prices in Singapore are reasonably competitive.  A United Minds survey in 2011 found that 100Mbps broadband access for businesses, was cheapest in Singapore amongst the 11 global cities it surveyed. 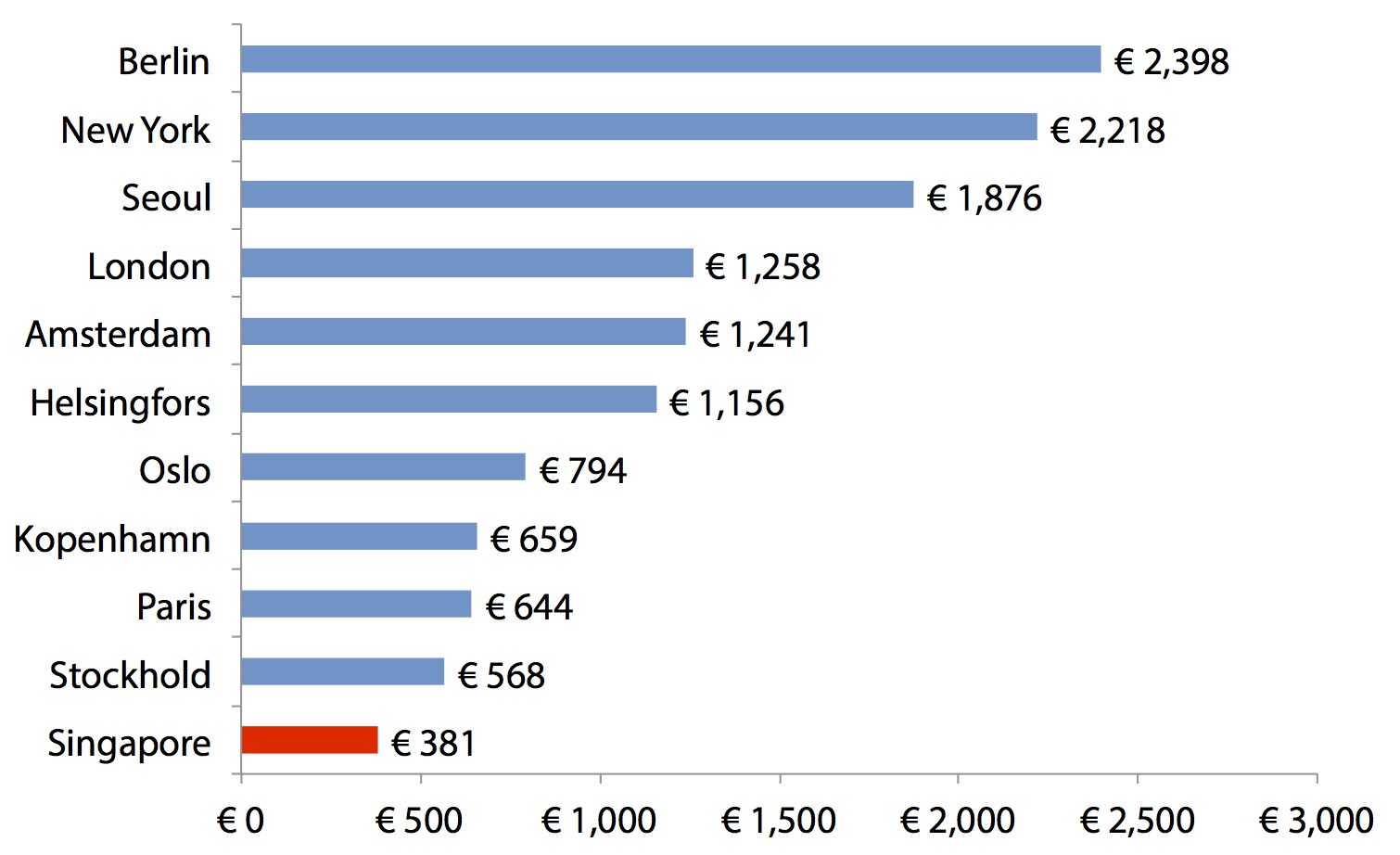 So what explains the reluctance of SMEs to switch to fibre?  Relative prices may be one reason.  Whilst fibre Singapore may be cheap, what matters is the price relative to the copper wire alternative that SMEs are currently using.  In 2012 Singtel advertised its  6Mbps “eVolve” fibre plan at $138/month, but its 4Mbps ADSL business broadband plan was available at a cost of $99/month. Fibre prices have since come down, and Singtel’s 10Mbps eVolve fibre plan (the slowest service available) is now available for $99/month – but copper prices are likely to have fallen as well.1

Greater demand for fibre at home?

Therefore, the reasons for higher take-up rates of fibre amongst residential customers might be that residential users have higher bandwidth requirements.  Market research commissioned by OpenNet indicates that emailing and video streaming are the most popular online activities in 2013. Video streaming in particular is typically done at home and would demand high bandwidth to ensure good video quality.  OpenNet also noted the launch of several initiatives that could increase demand for high bandwidth at home – Singapore Power for instance launched a Working-From-Home (WFH) initiative for its call centre operations and the National University of Singapore is trialling a tele-rehabilitation service for disabled homebound individuals.

In addition, incumbent ISPs were active in encouraging their residential ADSL customers to upgrade to fibre, perhaps in view of potential churn to new entrants.  For instance, Singtel offered preferential rates for its fibre broadband plans to their ADSL customers, free fixed voice calls with an upgrade to a digital home line and promotional rates on Singtel’s pay TV platform, mio-TV. Similar promotions or incentives for business customers have not been reported.

Another hurdle standing in the way of SME fibre take-up could be that businesses face higher switching costs.  A commercial tenant in a non-residential building faces higher installation charges for fibre than a residential customer would.  For residential buildings, fibre was rolled out to Fibre Distribution Points (FDPs) located on every floor.  For commercial premises however, fibre was deployed to the main distribution frame (MDF) or telecommunications equipment room (TER) of a building, typically located on the ground.  Therefore, residential customers are closer to their FDP compared with commercial customers, lowering installation charges.  Moreover,  the regulator, Infocomm Development Authority of Singapore (IDA), is funding the cost of the first 15m of fibre run from the FDP to the first termination point within the home for residential customer.  Such a subsidy was not available to commercial customers.

Disagreements between the commercial tenant and building management on who would be liable for these installation costs may cause installation delays.  Connecting commercial tenants may sometimes also require upgrading capacity rather than simply connecting their premises to the nearest FDP.  The fibre network that OpenNet has rolled out to commercial buildings is reported to sometimes to have insufficient capacity to support all tenants, which means that where demand for fibre exceeds available capacity supply, additional capacity has to be installed.  This may cause further delays as approval from the building management would have to be sought for such works.

In 2013, the waiting time required for the extension of fibre from the MDF or TER of a building to a tenant’s premise, for which OpenNet is responsible, was reported to be one to two months.  Indeed, disagreements with building managements have been cited as the main cause of such delays. OpenNet has indicated that such delays have been caused on occasion by building managements’ refusal to grant OpenNet access to in-building fibre links.

In addition, commercial tenants would need to seek approval from their landlords before installation, and commercial building owners and managements may not fully internalise the benefits of fibre to their tenants.  By comparison, home ownership in Singapore is high: around 90% of residential premises are occupied by the home owner.  Fibre installation for residential customers is therefore likely to go ahead without the need for residential building management to get involved.

In order to address the relatively poor take-up of fibre by SMEs2, the Singapore government recently announced a series of subsidies aimed at businesses as part of the 2014 budget.

Specifically, the government will subsidise half of the monthly subscription costs of a broadband plan offering speeds of at least 100Mbps.  This subsidy is capped at S$120/month for a maximum period of two years.

The subsidy for fibre would reduce and perhaps eliminate the price premium of fibre over copper.  A subsidy of $120 will lower secureit-net’s 100Mbps plan to a monthly cost of $145.  This is lower than the cost of the ADSL 10Mbps plan it offers ($168).3  With this subsidy, most business except those on a low value ADSL package should find it cost-effective to switch to fibre.4

The government will also subsidise 80% of the in-building infrastructure costs (up to a cap of S$200,000 per building) that is needed to extend fibre from the termination point in the building to tenants’ premises.  This subsidy should lower the switching costs for SMEs.   Simplifying the debate over who will pick up the bill should also reduce building owners’ resistance and help speed up negotiations with building managements.  However, it is questionable whether there will be a reduction in delays given that OpenNet struggles even at present with meeting in-building extension requests.  The subsidy however, should increase the attractiveness of opting for a provider other than OpenNet to perform the extension.  This may in turn stimulate competition in the market and incentivise OpenNet to improve its efficiency.  Whilst alternative operators are currently reported to charge three to five times more than OpenNet for installing such extensions, they may gain scale economies as their services are more widely used.

Another important driver for stronger fibre take-up would be the emergence of a genuine business need for higher bandwidth services and improved connectivity.  To this end, the government has provided subsidies for the take-up of “proven Information and Communication Technologies (ICT) solutions” that will increase business productivity.  The government will take on 70% of the costs of such solutions.  An example of such solutions is the use of “wireless integrated restaurant systems in the food and beverage industry that would relief service staff from manual and repeated tasks”.  In addition, the government will also fund 80% of the qualifying cost of SMEs that pilot “emerging technology solutions that can transform their businesses”.  These initiatives, particularly the first that is focused on ICT, could gradually increase the connectivity requirements of SMEs over time.  This in turn could create higher demand for fibre and the high speed, reliable connectivity it offers.

Overall, the approach addresses the three main reasons why SMEs may be reluctant to switch to fibre, namely on-going costs, switching costs and underlying needs.  The effects of lower switching costs will persist as businesses who have made the move are unlikely to switch back.  Whether businesses are tempted by the time-limited subsidy of monthly subscription charges is perhaps more questionable, as they should anticipate that, much like introductory offers by providers, these benefits run out.  Whether the third component of the subsidy package will succeed in changing the way business is done so that there is a persistent need for greater bandwidth, only time will tell.

Arisa Siong is an Associate of DotEcon based in Singapore.
Many of the points raised in this article have been discussed in more detail in an earlier report prepared by DotEcon for the FTTH Council Europe.