If Oftel’s recent statement on the future regulation of the price of calls to mobiles was meant to be an offer UK mobile operators couldn’t refuse, then something has gone horribly wrong. Vodafone’s rejection of Oftel’s proposed licence modification implementing a price cap of RPI – 12% per annum on mobile termination charges for the next four years means that the Competition Commission will in all likelihood have to look at the matter early next year.

Much of Oftel’s decision looks as if it had been designed with the primary objective of dissuading operators from seeking a Competition Commission review. Vodafone and Cellnet, both of which have been subject to a price cap on termination charges for the last two years, might have been relatively happy with the proposed X-factor of 12% – somewhat more onerous than the present regime of RPI – 9%, but judged by the financial markets as being a better than expected outcome. Orange and One2One would become subject to price controls on termination charges for the first time, but given their current market positions it would have been difficult to make a distinction between any of the four operators. By allowing the current differences in termination charges to persist, Oftel gave Orange and One2One a concession that they would risk losing in a Competition Commission referral.

What may ultimately have spoiled the success of this ‘something for everyone’ strategy was OFTEL’s decision to lay down a framework that ultimately suggests that regulatory intervention is here to stay. If one accepted that the relevant market for assessing competition is indeed a separate market for call termination on each individual operator’s network, then competition will always be imperfect (if not absent) as long as mobile operators control access to their own subscribers.

The good, the bad and the inconsistent …

A surprising element in Oftel’s analysis was the calculation of the benchmark call termination charge that ultimately suggested an X-factor of 12% per annum. This benchmark is based on the LRIC of terminating calls, an appropriate equiproportionate mark-up to allow for fixed and common costs, plus a further mark-up reflecting the social benefits from increased mobile penetration – the much-debated network externality. 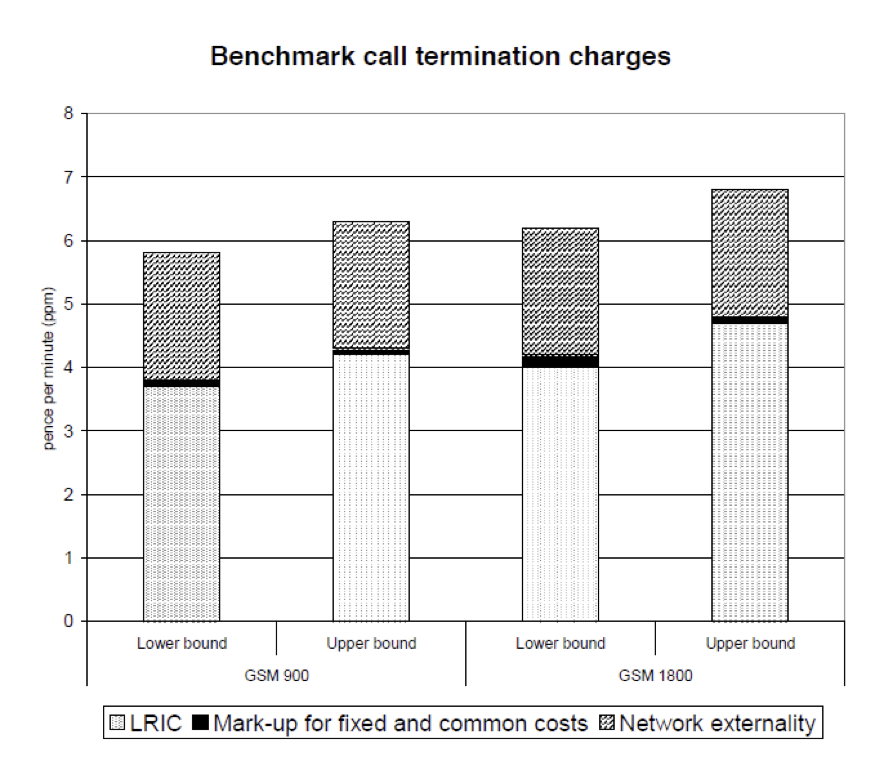 Moreover, allowing mobile operators to mark-up call termination charges in the expectation that this would stimulate mobile take-up is fundamentally inconsistent with Oftel’s other views. In particular, it contradicts:

After all, to have any impact on mobile take-up, any ‘excess profit’ that mobile operators are allowed to earn on call termination by having charges in excess of (appropriately defined) costs must be competed away in terms of lower subscription charges, mobile call charges or higher handset subsidies rather than being pocketed by the mobile operator.

Rather, Oftel’s decision suggests that the appropriate framework for assessing call termination charges is to look at competition between mobile operators in a wider ‘linked market’ for mobile services, a view of market definition that Oftel explicitly rejected. If this is the appropriate framework, however, then there is no reason to assume that charges for individual service elements should be set at long run incremental cost, or that mark-ups over LRIC should be the same for all services. In competing for customers, operators would have to recover fixed and common costs from those services where the detrimental impact from price increases on demand would be smallest. The principle that mark-ups should be inversely related to the elasticity of demand is known as Ramsey pricing.

A rose, by any other name …

Oftel itself suggests that allowing operators a mark-up for network externalities is similar to Ramsey pricing, at least where relative elasticities are driven by the impact of a growing subscriber base. Although Oftel’s logic is questionable, it is certainly the case that Ramsey pricing principles can imply optimal call termination charges above cost.

DotEcon, on behalf of one of the operators, has made this argument in response to the initial consultation, and has demonstrated that regardless of the precise value of price elasticities, there are good reasons to expect socially optimal call termination rates to be far in excess of the marginal cost (approximated by LRIC) of providing call termination services.1

In the end, any debate about appropriate markups for fixed and common costs has been pre-empted by Oftel’s cost modelling. In the Oftel cost model, almost all costs are incremental to three types of services – incoming calls, outgoing calls and subscriptions – and consequently the proportion of fixed and common costs that need to be allocated through mark-ups is surprisingly small.

That Oftel nevertheless felt compelled to offer an incentive to mobile operators to boost subscriptions suggests some nagging doubts about the longterm impact of regulating call termination charges. Even if there is a fundamental difference between acknowledging the validity of Ramsey pricing arguments and making an allowance for network externalities, the message from Oftel is that competition in the mobile market at large matters in assessing call termination charges – subsidising subscriptions and calls from termination revenues would otherwise make no sense as a policy to boost subscriptions.

Yet at the same time Oftel argues that the supply of call termination services, and competition in providing them, can be assessed in isolation, without looking at other aspects of mobile services. But then, as the Queen told Alice, if you only try hard enough you might believe as many as six impossible things before breakfast …