Once upon a time, banks and card schemes were accused of having hatched a dastardly plot for extracting money from merchants. The cunning plan was to charge merchants lots of money for receiving payments by card, and to use the revenue (or at least part of it) to provide incentives to customers to use their cards rather than other payment instruments. Merchants who could ill afford to lose sales were the helpless victims of this racket. They had little choice but to accede to the wishes of their customers. Even though they would have preferred to be paid in cash, they had to accept costly card payments. Trying to recover these costs by increasing prices across the board might have reduced the harm to merchants, but penalised those customers who used cheap cash for their purchases. In a modern version of Gresham’s law, bad money (cards) was driving out good money (cash) to the detriment of all and sundry.1

All this was driven by interchange fees – the money paid by the merchant’s bank (and ultimately recovered from the merchant) to the cardholder’s bank whenever a card payment was made. Interchange fees would allow banks to extract money from merchants and lavish it on cardholders, pushing card use and making merchants ever more dependent on this expensive form of payment.

Eventually, competition authorities and regulators had to ride to the rescue. Interchange fees had to be capped, or perhaps even abolished, unless the banks could demonstrate that they were set at a level that created overall benefits. The European Commission’s decisions against MasterCard and Visa, and the subsequent adoption of the so-called merchant indifference test that interchange fees would have to pass showed how this had to be done. Interchange fees had to be set at a level at which merchants would be equally happy to accept a cash or a card payment. Because customers were in the driving seat when it came down to deciding how to pay, this meant that their choices would not be distorted. There would be no interchange revenues that could be used by issuing banks to lower card fees, fund interest free periods on credit cards, or even run reward programmes. Lower interchange fees would prevent over-use of cards.

How wrong we all got it. Or at least some of it. A recent paper by Søren Korsgaard claims that higher interchange fees lead to fewer rather than more card payments because it is actually merchant acceptance that matters. At least as far as debit cards go interchange revenues do not affect the price of card payments faced by customers. All customers are assumed to have payment cards and choose their preferred payment method from all those that merchants accept entirely unaffected by the level of interchange. It is therefore merchant acceptance that determines the level of card use. Higher interchange fees make card payments expensive for merchants. This means that fewer merchants accept cards, and therefore fewer payments are made by card.

A look at the evidence

Korsgaard claims that empirical evidence is consistent with the findings from his model. With information about interchange fee levels being scarce, this claim is based on the observation that the four European countries with national debit card schemes that operated entirely without interchange fees that were part of the Eurozone in 2006 (namely Denmark, Finland, Luxembourg and the Netherlands) show the highest level of card usage, measured in card payments per capita. It is not entirely clear whether the underlying data measures all card payments or debit card payments only (which should be the relevant measure). However, data from Retail Banking Research suggests a much more differentiated picture. Looking at POS transactions per adult, the UK but looking simply at POS transactions per adult, the UK and Sweden – two countries without a strong national scheme – are up there amongst the leaders. 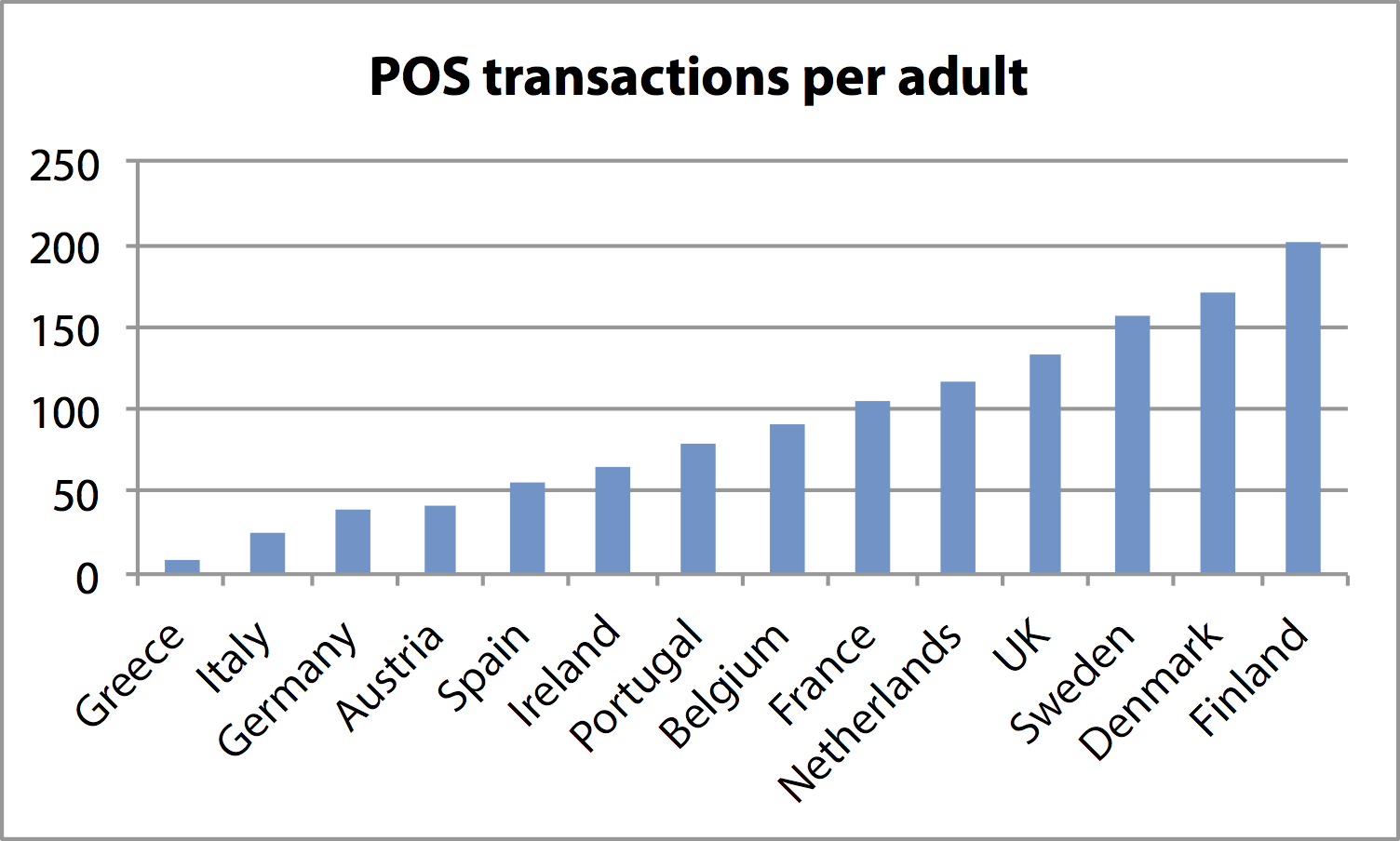 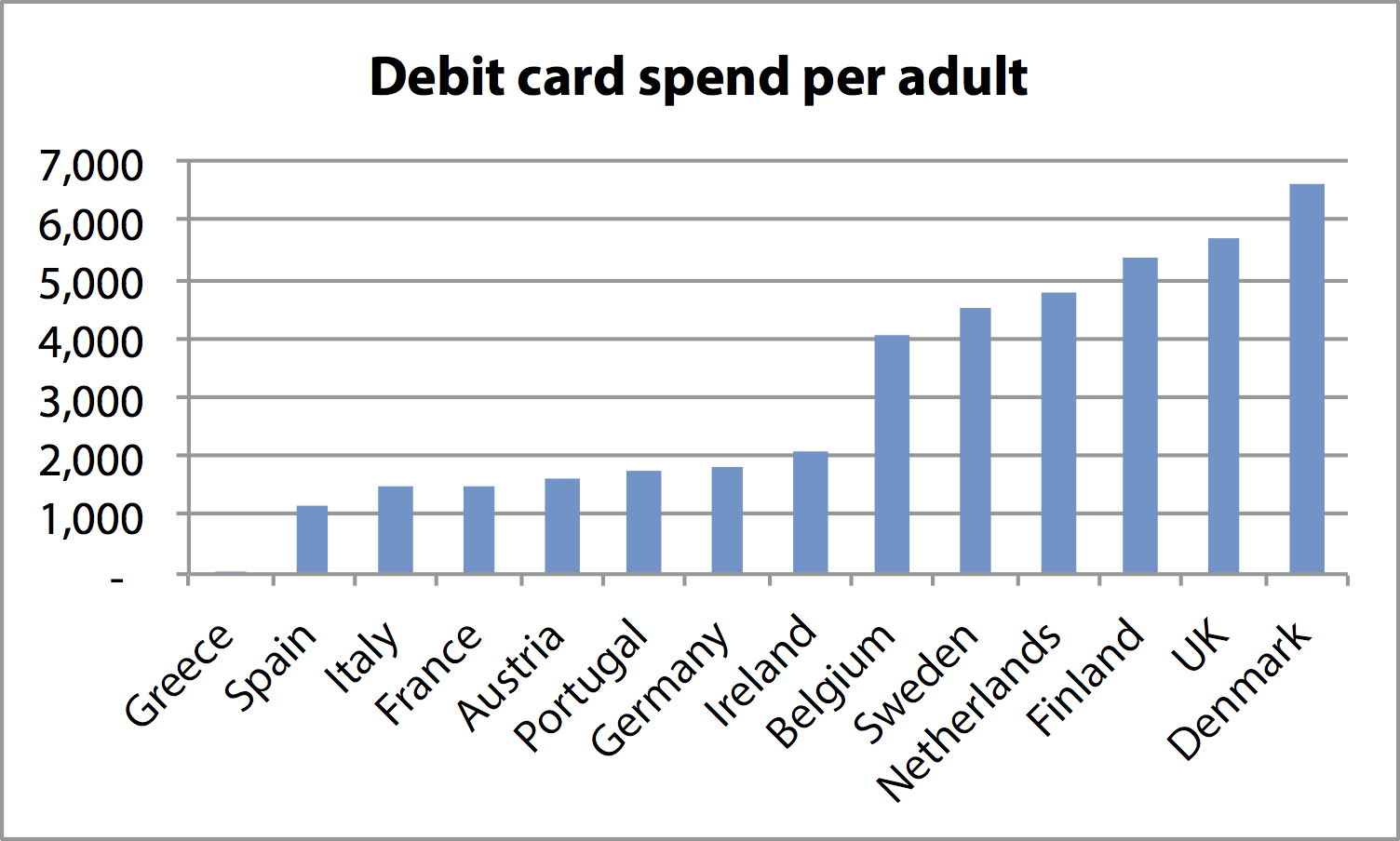 To the extent that the countries with a strong domestic scheme show higher numbers of card transactions and debit card spend, this does not appear to be driven by higher levels of merchant acceptance – in terms of the number of POS terminals per adult, the leaders are Greece and Spain where cards are barely used. The Netherlands can be found more towards the lower end. 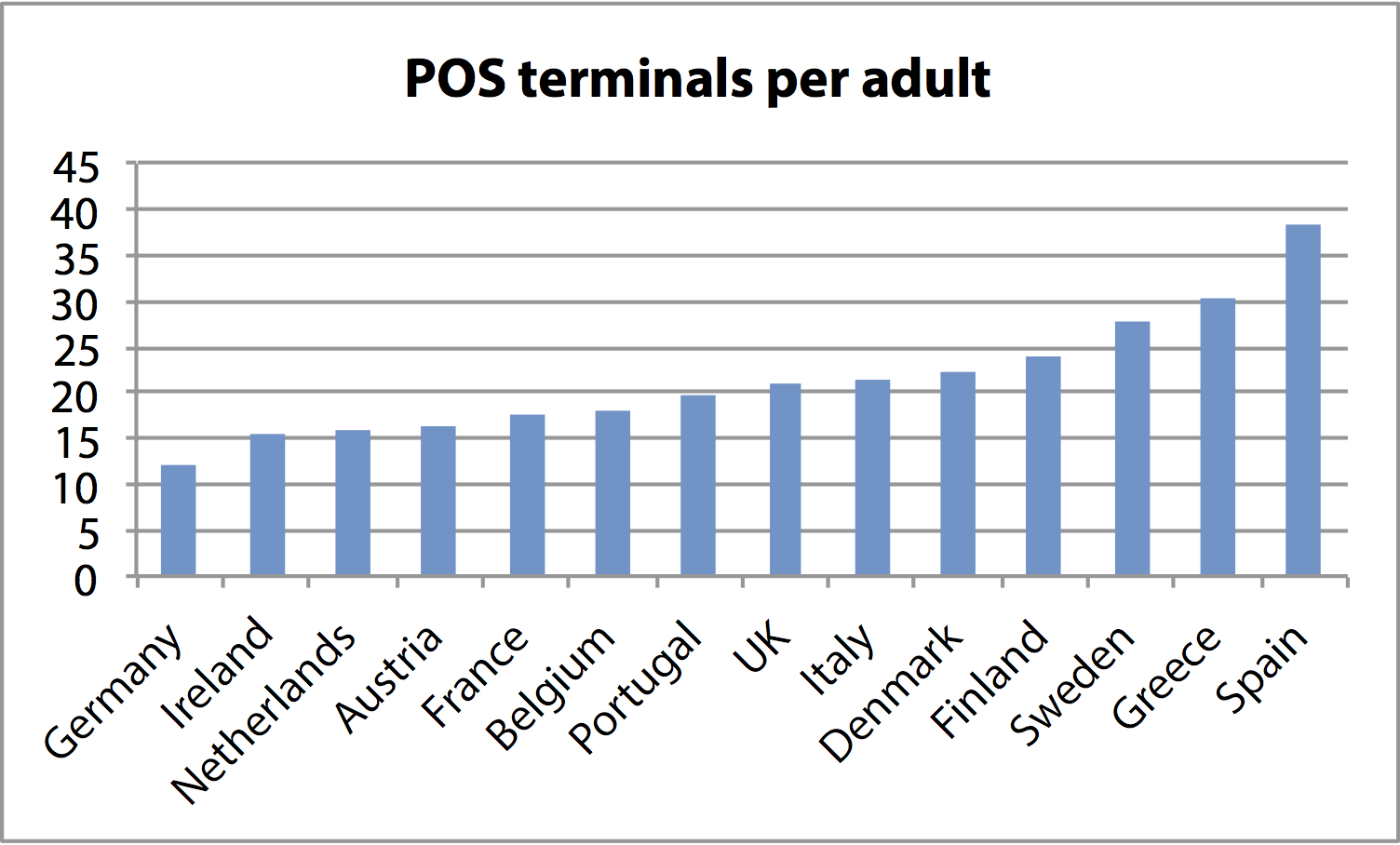 All of this might simply reflect that individual payment habits and preferences differ widely across Europe. This means that trying to link simple metrics such as the number of card transactions to interchange fee levels will not yield much insight.  It also suggests that promoting efficient payment choice is unlikely to be promoted by a regulatory approach that would see interchange fees pegged at similar or identical levels throughout Europe.

The crucial assumptions underpinning this analysis are that cards are universally available and that interchange revenues cannot be used to provide incentives for using them.2 They are justified by the observation that consumers usually do not face transactional charges for using their cards, and that banks tend to issue payment cards with every account.

Of course, one can take issue with these assumptions, and consequently the conclusions drawn from the model:

Although it is true that customers do not generally pay a per-transaction charge for using their debit card, the conclusion that interchange revenues have no impact whatsoever on the cardholder side is somewhat questionable. Korsgaard claims that the simplifying assumption of universal card ownership is justified because “it is common for consumers to automatically be provided with a payment card as part of their banking services.” This neatly side-steps the point that the decision of banks to issue payment cards with every account may not be entirely unaffected by the fact that customers using these cards generate interchange revenues. Without such revenues, banks could well decide not to include full payment functionality with their basic account holder cards. This would then bring the troublesome two-sidedness of the market right back into the picture.

Assuming that the new view is correct, however, can banks and card schemes now breathe a sigh of relief? After all, with merchants being the critical factor in determining the level of card payments, the very foundation of the initial accusation appears to have evaporated. Not so fast, though…

Another thing has changed in the meantime. The regulatory view of cash payments is much less rosy now. Numerous studies show that cash is far from being the cheap payment method that it appeared to be in the olden days. Benefiting from much stronger economies of scale, card payments are not only cheaper for most transactions, but offer other benefits such as, for example, being more secure and leaving a record. And with new forms of payment (such as contactless or mobile) coming to the fore, the consensus view seems to move towards regarding cash as an inefficient payment instrument that ought to be replaced by more modern forms of payment.3

And it is at this point that the card industry gets it wrong again – now not by making card payments too attractive, but by making them not attractive enough. Interchange fees are no longer the tool for over-promoting card use by extracting money from merchants.  The concern no longer appears to be that competition between card schemes drives up interchange fees because every scheme has an incentive to attract cardholders to make merchants ever more dependent on its cards. In the new view of the world, interchange fees are now the monopoly price that inefficiently limits merchant acceptance and leads to sub-optimal card usage.

The problem has changed from there being too much card use to there not being enough.  The solution, however, remains the same: Interchange fees need to be lowered to avoid the under-use of cards. And if card payments are cheaper overall than cash payments, then interchange fees have to be negative – i.e. merchants have to be paid to accept card payments. In the simple version of the model put forward by Korsgaard, the socially optimal interchange fee depends only on the cost of producing payments, and data from the Danish central bank collected as part of an ECB cost study suggest that the optimal interchange fee is negative (though close to zero). This is “because banks underprice cash payments services and therefore essentially subsidize cash usage”, and “[t]he optimal response for the social planner is require [sic] a low cost of card payments.” Perish the thought that the ‘social planner’ – assuming that it has all the information needed to avoid doing more more harm than good – might try to address the root cause of the problem, namely the fact that expensive cash payments are under-priced.

Overall, there seems to be some agreement that something is rotten in relation to the pricing of payment instruments (and not just in the state of Denmark). The cost faced by  the users of payment instruments simply does not reflect their social cost4, and cash is, mistakenly, considered to be a cheap way of paying.5

It is far from clear, however, that interchange fees are the sole villain of the piece. Except in the simplest models, how payments are made depends on both merchants and customers, and interchange fees are simply the exposed, most visible part of the machinery for re-allocating costs in this two-sided market. Yes, banks and payment card schemes may not set them at the socially optimal level (and it is worth bearing in mind that nobody can credibly claim to know what that level ought to be). However, the suspicion remains that regulators focus their attention on interchange fees simply because they are highly visible and provide an easy target.

So – to paraphrase one of Ashleigh Brilliant’s pot shots – the regulatory view on whether there are too many or too few card payments may have changed, but not the fact that interchange fees are too high. Those who are operating card payment schemes (and those who will be operating mobile payment schemes in the future) might be forgiven for feeling like living in a Kafka-esque world where the only certainty is that they are at fault.

Christian Koboldt is a Partner at DotEcon.  The views expressed in this piece are his, and have been affected by his involvement with competition and regulatory proceedings involving interchange fees in Europe and elsewhere.