As expected, Stage Four of the 600MHz US Incentive Auction, which drew to a close on, produced revenues from the forward auction that are sufficient to cover clearing costs.  Compared with our initial extrapolation, clearing costs have fallen by a little less, but willingness to pay has increased a little , and at the target of 84 MHz (which corresponds to 70 MHz of clear spectrum for mobile use) there is a comfortable difference between the demand from broadcasters (US$ 10.055 billion from the reverse auction) and the amount that mobile operators are prepared to pay (US$ 19.632 billion from the forward auction). 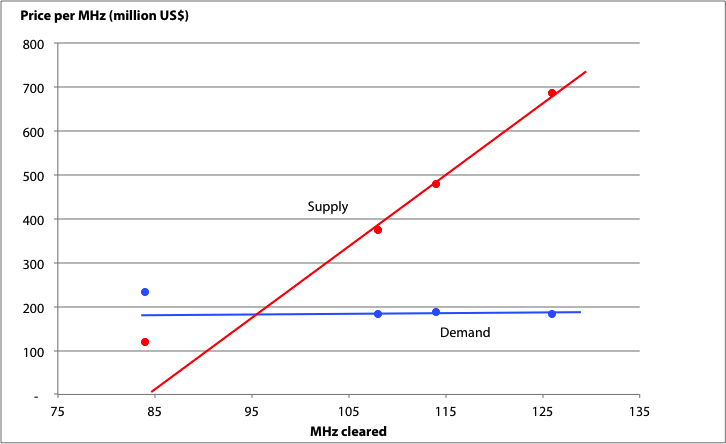 Overall, the picture is one where broadcasters appear to have have an initially high, but rapidly declining marginal valuation for spectrum, whilst mobile operators’ marginal valuation is initially lower (and substantially below the valuations achieved in the 700MHz auctions in the US and Canada) and increasing only slowly.  This is perhaps not surprising, as MNOs have potentially more alternatives in other bands for the deployment of new services than broadcasters have for the continuation of existing ones.  Does this suggest that it might be appropriate to retain some spectrum for terrestrial broadcasting? Whether bidding behaviour truly reflects valuation is of course far from clear, but it would not be surprising if that debate re-emerged.