When the Competition Commission looked at the proposed agreement between Octagon Motorsports Ltd and the British Racing Drivers Club, the owners and previous operators of the Silverstone circuit, it identified a number of distinct markets within which the agreement could potentially affect competition. UK motor sport circuits are not only used for staging racing events (thus serving spectators), but also to supply services to a participatory market involving either “enthusiasts and professionals using their own vehicles” (the ‘track-hire market’) or “one-off occasional customers who are provided with vehicles” (the ‘experience market’).1 In addition, the Commission looked at two upstream markets, namely the promotion of spectator events and the provision of track time to organisers of participatory events.

A key issue in all of these markets was whether Brands Hatch and Silverstone, together with Donington Park, were part of an elite group of ‘prestige circuits’. In the Commission’s words: “[I]t was suggested that Silverstone, Brands Hatch and Donington were all perceived as more famous than other circuits because they had all held a Formula One British Grand Prix in the last 15 years, and all continued to hold major international events.”2

Such a prestige effect could, for example, mean that organisers of championships might need to include one or more of these circuits in their racing calendar, or that those participating in track days or experience days would not consider any of the other licensed circuits (and even less so alternative venues such as unlicensed circuits or airfields) as a suitable alternative.

Whilst it may be tempting to conclude that the best known circuits are in a league of their own, the true picture is more complex.

The relative importance of geographic proximity and the willingness to travel is also the key to establishing whether there is a prestige effect in the market for participatory events, both with regard to final customers and intermediaries wishing to acquire track time.

Using postcode data from booking and billing databases, it is possible to establish catchment areas and calculate customer penetration – the proportion of customers living in a particular postcode area who have been attending participatory or spectator events at a particular circuit – by geographic area.This shows that:

Using the relationship between attendance and geographic proximity in order to establish whether there is a prestige effect, however, is somewhat more complicated. For this purpose, one first has to look at the impact of proximity to other circuits on attendance of events at a particular circuit, say Silverstone. Whilst customer penetration should increase with proximity to the circuit in question, it should be lower in areas that are closer to another circuit.

A simple illustration of this effect is given in the diagram below, where customer penetration is higher the darker the shading of the ring around circuit A. Looking at the proportion of customers attending events at circuit A, we would expect to find that this proportion is lower in an area that is closer to circuit B compared with another area that is the same distance from circuit A, but further away from circuit B. 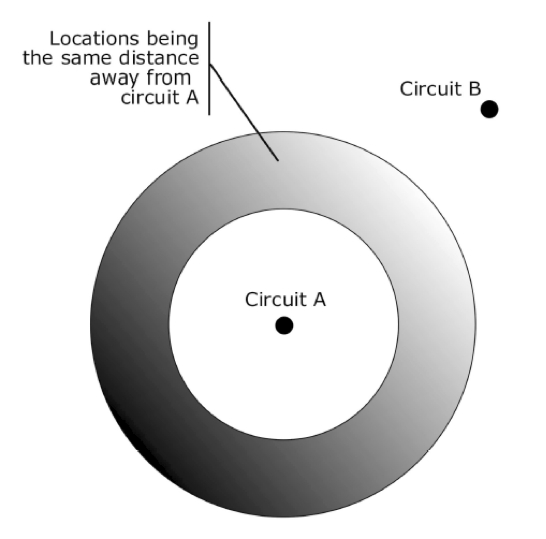 Although these competitive interactions between circuits are complex, depending exactly where circuits and spectators are located relative to one another, these effects can be unpicked by econometric analysis of customer data. Analysis of such data for both Brands Hatch and Silverstone clearly rejected the proposition that there is a distinct group of prestigious circuits. The impact of proximity to other circuits on the proportion of customers attending Silverstone was as significant as the impact of proximity to Donington and Brands Hatch. Similar results were obtained for Brands Hatch.

The Competition Commission found these arguments convincing and concluded that the notion of distinct prestigious circuits was not sustainable. This is an excellent demonstration of how the type of data companies now routinely collect to understand and manage their customers better can be analysed to yield statistically robust conclusions about market definition. Whilst many companies might think their products are prestigious, only their customers’ behaviour can tell us how different they really are.

DotEcon acted as adviser to Octagon in the Competition Commission inquiry.